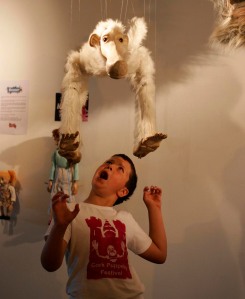 Cork Puppetry Festival 2015 was a wonderful edifice constructed on the foundations of last year’s inaugural festival.  As we sit back, take a breather and begin the process of taking stock of everything we learned, as well as sharing our best memories from CPF 2015, here’s a word of thanks from festival director Cliff Dolliver:
First and foremost we would like to applaud our audience, patrons and supporters, without you it is worthless. Images of an audience watching a performance from under umbrellas in a rainy Fitzgerald’s Park, the standing ovation for Flabbergast, and Tommy Baker enthralling a full house at The Crane Lane Theatre will stay with us and inspire us to bring you a bigger and better festival in 2016.
We gratefully thank the following.
The Arts Council, Cork City Council Arts Office, and Parks Department for funding, Camden Palace, the Theatre Development Centre and Crane Lane Theatre for hosting and sponsoring the festival.
Tommy Baker, Dog and String Theatre, ShadowLight Productions, Dowtcha Puppets, Dominic Moore, Your Man’s Puppets, Púca Puppets, Terry Dineen, Fionn Woodhouse, Emma Fisher, Alicia Falvey, Flabbergast Theatre, and Sarah Jones for performances.